The Magic of Puppets

I’m not a great fan of magic; unless we’re talking Dynamo ( now he is just special).

You know what I mean, that flouncy, hand wafting, mis-directional camp affair that passes for performance on the Las Vegas stage. David Blaine used to intrigue me until he locked himself in a cube and went without dinner for a while. That killed it for me.

Most birthday party entertainers do some magic.

Without wanting to give the game away to those who really and truly believe in magic,  magic is all about lying. It’s about illusion, convincing people that stuff that is impossible is real.

To be a convincing magician, you have to be able to look people in the eye and say ‘That’s magic’, in inimitable Paul Daniels fashion. I’m not capable of that, I’m afraid.

If I did magic, I’d just want to tell children how it is done; that would make me a bit of a killjoy. I’d rather not. I’d rather stick to puppet magic.

I can’t even mislead children when they tell me that the puppets I use aren’t real. I agree, well, in a manner of speaking. I tell them that the puppet is real,  but that the animal /character isn’t real. After all, it would be really scary if the monkey puppet I was using was a real monkey, and a talking one at that. Now that would really freak me out, let alone a bunch of children. That honest explanation seems to put children at ease, especially when I explain that the puppet has to borrow my voice to speak. I’m  not a ventriloquist, nor do I try to be. I don’t find it necessary. For me the magical aspect of puppetry is that the puppeteer brings the puppet to life through belief. If the puppeteer believes in the puppet, the puppet will animate and be believable as a character in it’s own right.

As a child, my first experience of puppets was Mr Punch on the seafront at Skegness Beach. 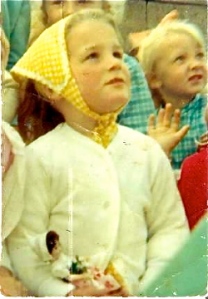 Mr Punch in turn thrilled and repelled me. I couldn’t understand his squeaky raspy voice or why he was hitting Judy with his slapstick but I didn’t really care. What I saw was strange and fascinating and other-wordly. I was hooked. 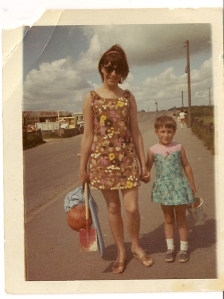 Off to the beach with mummy.

Shari Lewis‘s Lamb Chop, the gorgeous sock puppet won my heart on our black and white television. Then with the advent of colour television came Basil Brush.

He was real to me then and still is now. I cannot imagine Basil the lovely English gentleman fox with his distinguishing laugh      ( Ha ha ha ha ha ..BOOM BOOM!)

having a person attached to him. To my child’s eyes he wasn’t a puppet, he was just Basil : the fox that spoke. There was no other explanation needed.

Then along came Thunderbirds.

That show messed with my head.

Those puppets looked so real to me . I remember having a real problem working out whether they were real ( as in real actors) or not. I saw the awkward walk ( beautifully lampooned in Team America) and doubted my convictions , then they would put in a close up of a real hand operating machinery and I would be back to my original idea that they were indeed real people. So confusing.

I see this interesting quandary echoed on my children clients faces every time I enter into the magic of puppets. I can see their eyes questioning how real the puppets are every time they engage and invest in the puppet’s personality. When it all gets to much for them then they ask the question if they are real.

My answer satisfies them enough for them to still talk to the puppet once it is off my hand and back in the suitcase, shouting their goodbyes at the empty shell of the puppet.

Now that’s  the sort of magic I love.