Here is the story of Cinderella told with pictures of my puppets. 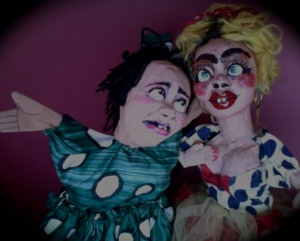 Grizelda and Mona are Cinderella’s step-sisters. They are not that ugly on the outside but oh dear, they aren’t very lovely on the inside.

Grizelda spends her day crying about nothing at all, and having tantrums. Even though she has lots of things, she never feels like she has enough and always wants what belongs to someone else.

Mona is a moaner and is very vain. She thinks she is so beautiful and wears lots of make-up. She constantly criticizes others for how they look, but inside she is happy that they don’t look as good as she does.

Neither of the sisters are kind , thoughtful, caring or clever. They are both bullies and love to boss around their step-sister Cinderella…who is kind, thoughtful, caring and clever. But she is forced to dress in rags and clean the house and live as  a slave by her wicked Step-mother after her father sadly died. 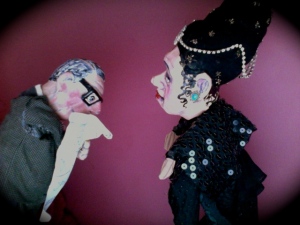 Wicked Step-mother receives an invitation to the Royal Palace

One day the household received an invitation from the Royal Palace to a ball . Prince Charming was to hold a ball that was to be attended by all the unmarried women in the Kingdom. This made Cinderella’s Step-mother really excited: now she could find the perfect husband for her daughters or even, maybe , herself! One thing was for sure though, Cinderella was not to go, but was forced to stay at home and clean.

Cinderella and the Fairy Godmother

Cinderella was so sad that she wasn’t allowed to go to the ball that she sat by the fire and cried. Then suddenly to her amazement, a magical lady all dressed in white appeared and said she was Cinderella’s Fairy Godmother. “You shall go to the ball!” she proclaimed.

“But I have no clothes to wear, look at my rags!” wept Cinderella. “Even if I had a change of clothes, I have no way of getting to the Palace”.

The Fairy Godmother instructed Cinderella to fetch a pumpkin from the garden vegetable patch and four white mice. 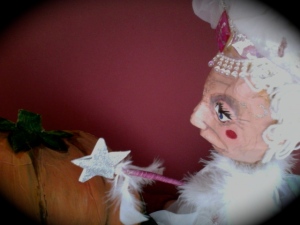 With a wave of her magic wand and an Abracadabra! the Fairy Godmother turned the pumpkin into a golden carriage fit for a princess and the four white mice into four beautiful white ponies to pull it.

Cinderella was astonished . She looked down at her rags and sighed.

With an swish of the Fairy Godmother’s  magic wand, Cinderella’s wish came true.

Cinderella is ready for the ball

Cinderella looked like a real princess. She had a crown on her head, flowers in her hair, a splendid dress and my goodness, on her feet were the daintiest, prettiest glass slippers that she had ever seen! She thanked her Fairy Godmother and climbed into her carriage and rode off to the ball.

The Fairy Godmother shouted out after her: ” Be back before the clock strikes midnight! Remember the magic will wear off after then”

Cinderella danced the night away at the Royal Palace. The Prince was not interested in any other girl at the ball, his eyes and his heart had fallen in love with the most beautiful girl there, inside and out, Cinderella.

Cinderella’s Step-sisters and Step mother were not happy. Where did this mysterious princess come from , they wondered.

Gazing into the Prince’s eyes, Cinderella did not notice time passing.

Cinderella realised it was getting close to midnight and she had to get home fast. She darted away from the Prince. DONG DONG DONG DONG ” Where are you going? ” shouted the Prince as he ran after her.

” I have to go, sorry!” panted Cinderella as she dashed up the palace stairs, leaving one of her glass slippers behind.  DONG DONG DONG DONG and with that final chime of the clock, Cinderella was back in her bare feet and rags , running down the street back to her house followed by four white mice.

Prince Charming was heartbroken. Where had this beautiful girl gone and why had she run away from him? He picked up the glass slipper from the stair  and vowed that he would search his kingdom to find the girl who the glass slipper fitted. 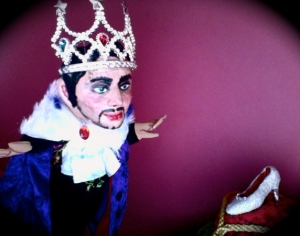 Prince Charming vows to find the person who lost her slipper

Cinderella got back in time to hear her ugly sisters and her wicked Step-mother return. All they were talking about was the mysterious princess who had ruined their night.

In the morning they were all woken by a knock on the door, it was the Prince! He had come to try the glass slipper on the feet of all the ladies of the household. Cinderella was told to stay in the kitchen while her ugly sisters and her step mother tried in vain to fit the tiny shoe on to their large and knobbly feet.

The Prince was desolate. This was the last house in his kingdom, and the shoe didn’t fit anyone.
” Is there no one else here that could try?” he asked.

The sisters and step mother shook their heads.

As the Prince got up to leave, Cinderella creaked open the kitchen door , ” I’m here” she said.

As soon as the Prince slipped the glass slipper on Cinderella’s foot, she transformed into the Princess of his dreams as if by magic.

“Will you marry me, Princess?” he asked.

Of course she answered yes.

And guess what? They all lived happily ever after.

Well apart from the Step-mother and the two ugly sisters, who had to learn to do their own chores .